Vitazyme intensifies the activity of the plant-soil system. Photosynthesis is increased, so more carbon from the air is fixed into plant tissue. Energy-rich compounds produced in the leaves by this vigorous metabolism move into the root system and out into the soil, or media where billions of bacteria, algae, fungi, protozoa, and other organisms feed on this energy. The organisms, in turn, release minerals and growth stimulants for plant uptake…a beautiful symbiosis. Plant stress is reduced, removing growth and yield limitations.

Vitazyme contains “metabolic triggers” that stimulate the plant to photosynthesize better, fixing more sunlight energy in the form of carbon compounds to increase the transfer of carbohydrates, proteins, and other growth substances into the root zone. These active agents may enter the plant through either the leaves or the roots. Root growth and exudation are both enhanced. This enhancement activates the metabolism of the teeming population of rhizosphere organisms to a higher level, triggering a greater synthesis of growth-benefitting compounds and a faster release of mineral for plant uptake. The plant microbial symbiosis is stimulated. 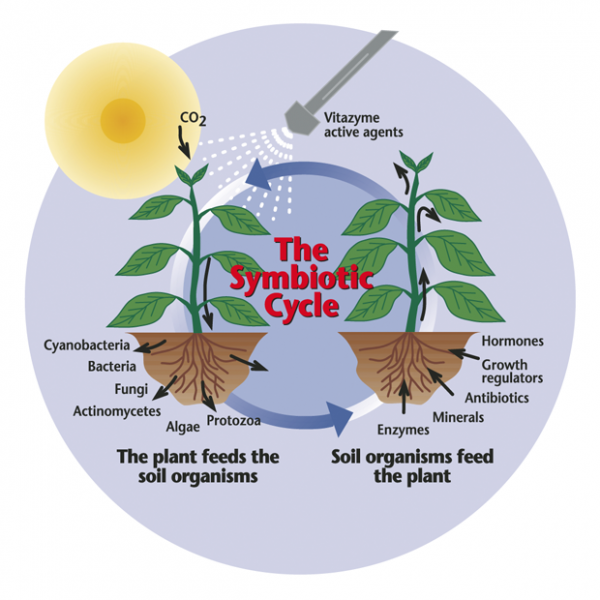 Very small amounts of these metabolic triggers in Vitazyme are needed to greatly improve plant and rhizosphere microbe response. This is because of the enzyme cascade effect. Successive tiers of enzymes are activated in plant and microbial tissues to yield a large physiological response from very little applied activator.

In short, Vitazyme enables the plant to better express its genetic potential by reducing the stresses that repress that expression.

All plants that grow in soils develop an intimate relationship between the roots and the organisms that populate the root zone. The teeming billions of bacteria, fungi, algae, cyanobacteria, protozoa, and other organisms that grow along the root surfaces—the rhizosphere—are much more plentiful than in the bulk of the soil. This is because roots feed the organisms with dead root epidermal cells as well as compounds exuded from the roots themselves. The plant may inject up to 25% or more of its energy, fixed in the leaves as carbohydrates, amino acids, and other compounds, into the root zone to feed these organisms… for a very good purpose.

The microorganisms which feed on these exuded carbon compounds along the root surfaces benefit the plant in many ways… a beautiful symbiotic relationship.

The plant feeds the bacteria, fungi, algae, and other microbial species in the rhizosphere, which in turn secrete enzymes, organic acids, antibiotics, growth regulators, hormones, and other substrates which are absorbed by the roots and transported to the leaves. The acids help dissolve essential minerals, and reduced iron releases anionic elements.
A few important microbe groups are listed below.

Mycorrhizae, especially vescular-arbuscular (VAM) tyes, form "arbuscules" within root cortical cells and extend thread-like hyphae into the soil, increasing the root feed surface by ten times or more. They are the major means for uptake of phosphorus, copper, zinc, and other less mobile elements. They also can extract water under much drier conditions than can root plants.

Cyanobacteria fix carbon (they photosynthesize), and also fix nitrogen from the air for plant use.

Azotobacter species live on exudates and other carbon sources while ﬁxing nitrogen.